Ireland’s Summer Opera Festival joyfully engages audiences through a creative and imaginative programme of opera and classical music in the beautiful Blackwater Valley. We showcase emerging Irish talent alongside established international artists and delivering memorable and inspirational experiences that enrich the cultural life of the region.

Lismore Castle has been the Festival’s home since 2010. The old Stable Yard and impressive grounds of the Castle provide a magical backdrop for our bespoke opera production each summer. 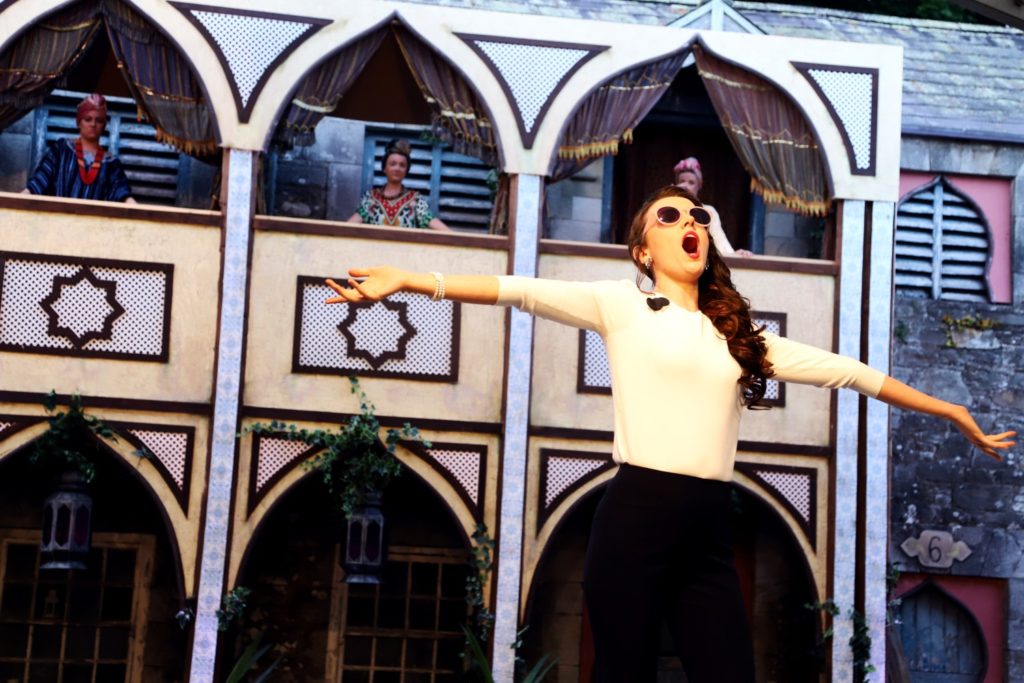 In 2021, our festival moved to new dates in September (due to the COVID-19 pandemic) and featured Puccini’s wonderful opera Gianni Schicchi and a superb array of concerts and recitals. We will return to our position as Ireland’s Summer Opera Festival from 31 May – 6 June in 2022. 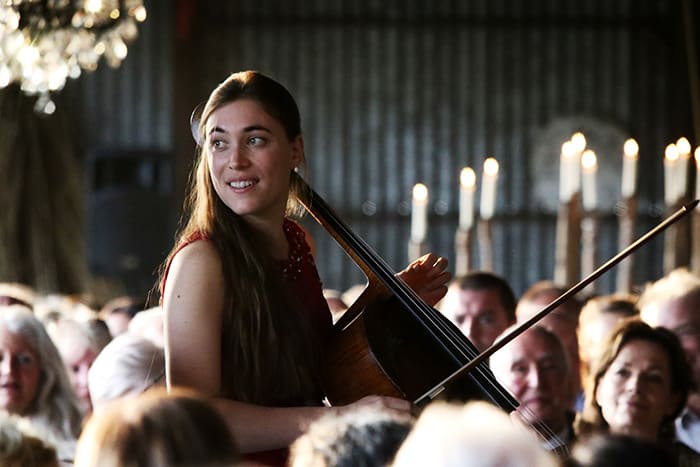 In all that it does, the Blackwater Valley Opera Festival aims to promote excellence and as part of our commitment to championing emerging artists and  fostering a love of music and opera in the next generation, we lead a number of initiatives:

“Music is such a powerful medium and the Blackwater Valley Opera Festival has been working tirelessly promoting the beauty and relevance of opera. It is wonderful to witness results of the drive and enthusiasm of such dedicated people making opera more accessible and connected to audiences in such an inclusive and authentic manner.”

Eamonn is an experienced development professional with a significant track record in high-level sponsorship negotiation, implementation and activation. Prior to becoming Festival Director he was Membership Relationship Manager at the RDS. Before this he directed the sponsorship and Friends strategy for Wexford Festival Opera and Wexford Opera House and managed key relationships for the company with leading Irish and international philanthropists. He has represented the cultural sector on the Minister’s Working Group on Arts Funding & Philanthropy. Formerly, Eamonn was Assistant Chief Executive and Head of Fundraising with the leading Irish research charity Fighting Blindness and Vice-President of the Students’ Union at NUI Maynooth. Eamonn previously served as a BVOF Board Member from 2017 and became Festival Director in April 2019 at Ireland’s Summer Opera Festival.

For 10 years Dieter Kaegi was director of productions at the renowned Music Festival in Aix-en-Provence. He became assistant to the general director of Monte Carlo Opera followed by for twelve years as Artistic Director of Opera Ireland in Dublin. Since 2013 Mr Kaegi has been General Director of TOBS, theatre, opera and orchestra of Biel and Solothurn in Switzerland.

In 2009, together with Jennifer O’Connell he co-founded the Lismore Opera Festival (which changed its name in 2018 to Blackwater Valley Opera Festival) and he continues to act as its Artistic Director at Ireland’s Summer Opera Festival.

Breda has acted as Financial Controller since the 2018 Festival. Founder and principal of Lismore Accountants since 2015, Breda is a Chartered Accountant with over 20 years’ experience. Qualifying in 1999 while working with Deloitte in Cork, she has extensive experience dealing with businesses in this increasingly competitive and changing world and has a wide range of business experience. Breda served as Chief Executive at the 2019 Festival, overseeing the implementation of plans to meet the financial, commercial and operational objectives of the festival in line with BVOF’s ambitious 5 year growth plan.

Conleth has been working in the Arts from a very young age. He has both a Bmus and Mmus from the Conservatory Music and Drama, DIT/TUD.

As a performer he has worked in Ireland and the UK before turning his focus to offstage in supporting roles to productions.

Emma founded and curates the unique on-line artisan collection ‘I am of Ireland’ (www.iamofireland.ie / +353 87 7997317) specialising in high quality Irish Art and Craft. I am of Ireland’s collection is also available to view from her family home gallery just outside Youghal. During this year’s festival ‘I am of Ireland’ will exhibit at Salterbridge House between 28th May – 3rd June.

Fiona lived in London for 20 years, working as a Trade Floor Technical Analyst for Deutsche Bank and CIBC World Markets. Returning to Ireland in 2011, she became involved with Blackwater Valley Opera Festival in 2015 (formerly Lismore Opera Festival). Fiona manages an office for a local engineering company. She is co-ordinator of the Opera Dress Rehearsal (Schools’ Night) filling the auditorium with over 400 excited and enthusiastic school children at Ireland’s Summer Opera Festival.

Michael co-founded RAB Capital plc in 1999 and is Executive Chairman. He was a Director at ABN-AMRO Hoare Govett from 1996 to 1998 and prior to that held senior positions at Merrill Lynch, Smith New Court and James Capel. Michael is Chairman of the Blackwater Valley Opera Festival Board, a Founding Partner of the ARK Brunel Academy and a Patron of Irish Heritage which supports Irish musicians & Irish composers in Great Britain to a wide audience. Michael is also a supporter of The Bush Theatre, Almeida Theatre, Donmar Warehouse plus Garsington and Glyndebourne operas. Michael has been a BVOF Board Member since 2017.

Gianni has worked as an independent documentary film maker for broadcast television in the UK (1980-1997). She is a Founding Partner of the ARK Brunel Academy School and has been a board member and fundraiser for KIDS, the UK-based charity providing services for children with disabilities and their families (1999-2006), and a board member and fundraiser for the Alternative Theatre Company, AKA The Bush Theatre, London, (2006-2018). With particular expertise in youth development, education and hospitality, she is also a Board Member of the RFHotels Group since 2014. has been a Lismore Music Festival, and now BVOF Board Member since 2017.

Conor is Chairman of Doyle Shipping Group (DSG). DSG provides shipping services in the ports of Cork, Dublin, Foynes, Fenit, Geeenore and Belfast. Conor Doyle is Finnish Consul in Cork. He is a director of Corcadorca. Among his former offices he was Chairman of Cork Port Company 1989-91, President of Cork Chamber of Commerce 1997/9, Chairman of National Sculpture Factory 2008-2017, Commodore of Kinsale Yacht Club 1983-86. He was formerly a director of Eagle Star Insurance Company and Cork and Limerick Savings Bank. Conor has been a Lismore Music Festival, and now BVOF Board Member since 2017.

Patrick is a Chartered Accountant. He qualified with PWC where he worked in the Audit and the Tax Departments. He joined JLT as Finance Controller in 1984 and filled various roles before being appointed Chief Executive in 1995 a position he still fulfils. He served on the Irish Brokers Association of Ireland from 1992 to 1995 where he chaired the Strategy and Technology Committees. He has a keen interest in music having been a member of the Italian institute choir and Kilmacud Musical Society. Currently he is a member of the Celtic Choristers and the Rathfarnham Ukulele Group. Patrick has been a Lismore Music Festival, and now BVOF Board Member since 2018.

Appointed Director of the Royal Irish Academy of Music in 2010, Deborah Kelleher has played an integral role in the strategic development of the institution’s international profile, outreach, and academic courses. Milestone achievements include the introduction of specialised undergraduate degrees in composition and vocal studies; RIAM Podium, the Centre for Performing Ensembles, and the founding of Ireland’s first Historical Performance Department. In 2013, the RIAM became an associate college of Trinity College, the University of Dublin, and Deborah led this significant transition. The RIAM has also forged significant performance partnerships with many of the world’s most prestigious music conservatoires including the Juilliard School, New York, Guildhall School of Music and Drama and the Liszt Academy, Hungary. In May 2020, RIAM began a €22 million re-development of its campus, a project which will go hand in hand with a substantial review of RIAM’s mission, curricula and organisational structure, to be completed in time for the Autumn of 2021. Deborah is also Vice-President of the European Association of Conservatoires, the umbrella group for over 300 higher music education institutions in Europe, USA and Asia.

Brian Kingham is a London and Wicklow based businessman.  He has founded more than a dozen businesses in support services, security, building engineering and electronic systems.  He has interests in cyber security, data analytics and the digital economy.  He is a global investor in early stage technologies. He is a supporter of various youth development initiatives in education and entrepreneurial endeavour.  He has a long association with the University of Buckingham where he was Chairman of the new Medical School Development Board and provides an annual Scholarship for Entrepreneurs.  He is a former member of the Court of Brunel University.  He was an early promoter of private opera in London and country houses organising private performances for more than 30 years. Brian has been a Lismore Music Festival, and now BVOF Board Member since 2016.

Tom holds a BA in Economics, an MBA and a DBA from University College Cork. Tom is the Managing Director of McCarthy Developments (Cork) Ltd. which is a property development company and is part of a wider business portfolio which includes McCarthy Properties (Property Management Entity), privately owned, successful commercial entities that are opportunity led. The group’s main focus in on the residential, commercial and leisure sectors. Tom takes an entrepreneurial approach to business, is opportunity led and results driven. He believes in integrating the highest quality standards across all aspects of the business. His core competencies are in risk management and strategic planning. He has a proven track record in dealing with the complexities of asset acquisition and management, managing multi-location projects, involving large multi-disciplinary teams while maintaining effective financial management and a strong customer focus. Tom has been a Lismore Music Festival, and now BVOF Board Member since 2017.

Natasha McKenna studied Law & European Studies during her BA degree at The University of Limerick and qualified as a solicitor in 2002. She is the Founder and Principal of Natasha McKenna Solicitors, practising in the areas of property, wardship, probate and childcare and undertaking all roles involved i the practice including regulatory and accounting. She is a former partner at Mason Hayes & Curran Solicitors and was Head of the Arts Committee within that firm. Natasha has lectured in the Law Module of Trinity School of Social Work and Policy undergraduate and postgraduate courses. She is also Head of the Irish Hospice Foundation‘s Corporate Committee and a Board Member of the RHA Programme Advisory Board Since 2018.

Susie Wingfield has been visiting the Blackwater Valley for almost half a century and has lived at Salterbridgefor 25 years. She is deeply involved in the local community and has been an active supporter of the Lismore Opera Festival, now BVOF, since its inception in 2009. For the past nine years she and her husband Philip have hosted a recital at Salterbridge during the Festival. Susie was co-founder of the Cystic Fibrosis Research Trust Ireland which funded ground breaking research into this disease from 1989-2008. The work continues under the umbrella of CF Ireland. Susie, having joined the BVOF board in 2019, brings a wealth of organisational abilities as well as strong & diversified networks across Ireland. One of Susie’s focuses for 2019 will be to build the Local Hero’s network.