All opera performances will be sung in Italian with English surtitles

Each festival season, our production team turns the Old Stable Yard at Lismore Castle into a pop-up auditorium with comfortable, raked seating under a stretch canvas. This creates an intimate setting that brings each audience member close to the action on stage, creating the beguiling atmosphere for which BVOF has become known.

In spring every year, our talented set designers and builders work hard to tweak the beautiful Old Stable Yard so that it melds effortlessly with each new opera’s narrative. Our patrons return year after year to witness the magic unfold – it is truly an immersive opera experience like no other.

There will be a 30 minute interval

Your Evening At The Opera

It is our intention to make your visit to Lismore Castle a memorable and uncomplicated one, free from any worries or concerns. To this end, our friendly volunteer group will be on hand to help you with anything you may need. From the moment of your arrival, our volunteers will be available to make your Festival experience a wonderful one.

A limited amount of car and mini-coach parking is available in Lismore Castle car park but there is plenty of parking within short walking distance. Our traffic management volunteers will guide you.
Patrons and their guests are welcome to arrive from 17.30. The bar will be open and you are welcome to enjoy a glass of wine or pass the time by exploring the seven acres of historic gardens at Lismore Castle. Lismore Castle Arts also grants free and exclusive access to our guests to see the current summer contemporary art exhibition.
To gain access to the grounds, all visitors must show their tickets, or provide the name of their host at The Riding House located at the end of the avenue leading to the Castle. Complimentary Opera programmes will be available at this point.
We operate a golf buggy system for those who may have mobility challenges. This service transports guests from the entrance to the dining and performance area.

A limited allocation of parking is also available for holders of Disabled Parking Permits. Please contact us at boxoffice@blackwatervalleyoperafestival.com / +353 (0) 87 7997317 in advance and we will be delighted to assist you.

From 18.00 : Pre-performance Hospitality in the Castle Gardens

Music is the food of love, but wonderful food makes the music all the sweeter.

At this year’s Blackwater Valley Opera Festival, there is an outstanding array of dining and choices within the bewitching walled gardens of Lismore Castle.
We have fabulous feasts, luscious desserts, and the finest snacks. Naturally, this includes delicious vegetarian options.

We are proud to partner once again with the best of the best: acclaimed local chef, Eunice Power. The three-course, sit-down dinner, with vegetarian option, in the exclusive canopied walled garden of Lismore Castle will be available at all double-bill performances. The opera menu must be pre-booked and pre-paid at the time of ticket purchase or through our box office at least 3 days before the performance. The option to purchase the opera menu will be presented at the time of purchasing tickets online. 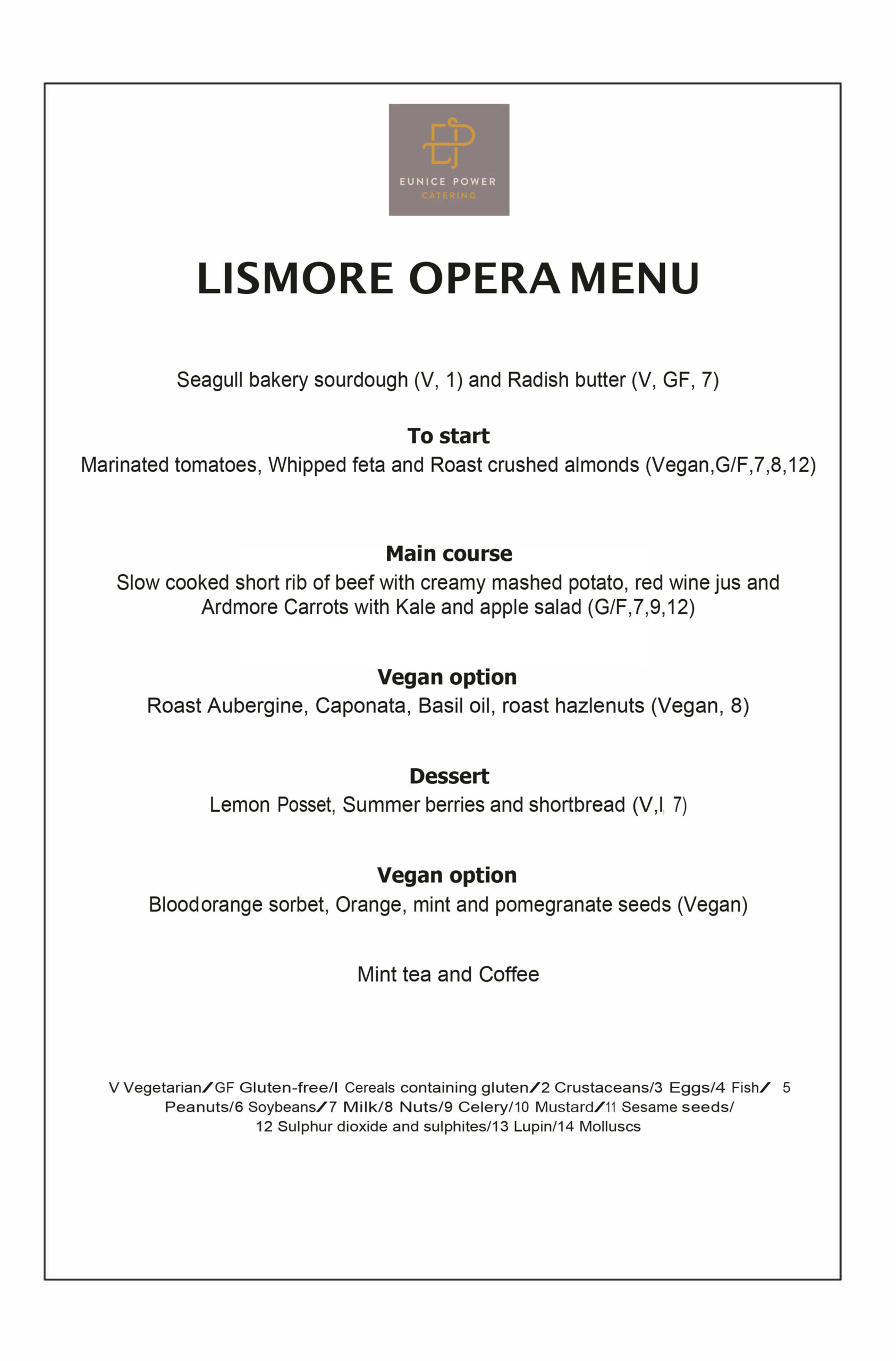 In partnership with Mezze of Waterford, we are delighted to offer two picnic dining options. These informal dining options take place in the lower garden beside the main hospitality area. Advance booking is essential. Picnics must be pre-booked and pre-paid at the time of ticket purchase or through our box office at least 3 days before the performance. You will be able to choose your preferred picnic option when you are purchasing your opera tickets online.

Choose from the following picnic options: 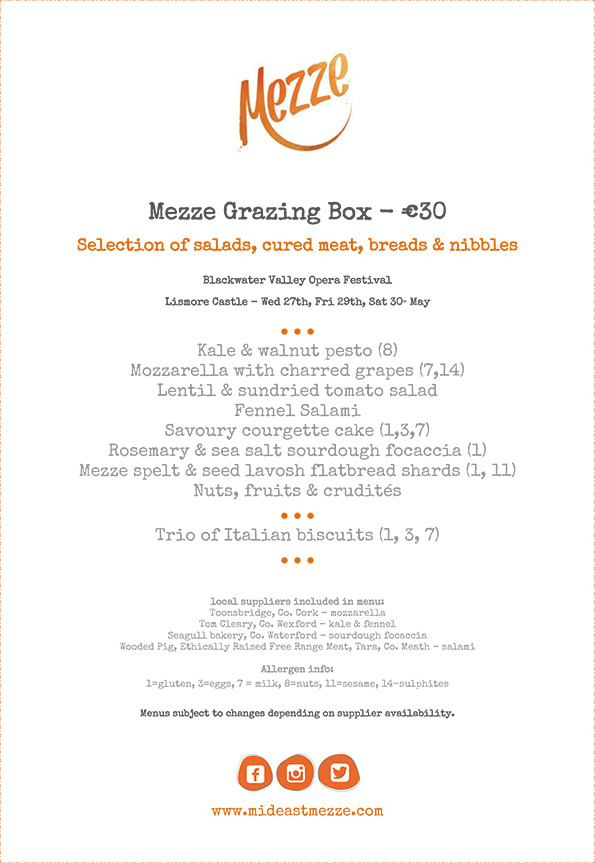 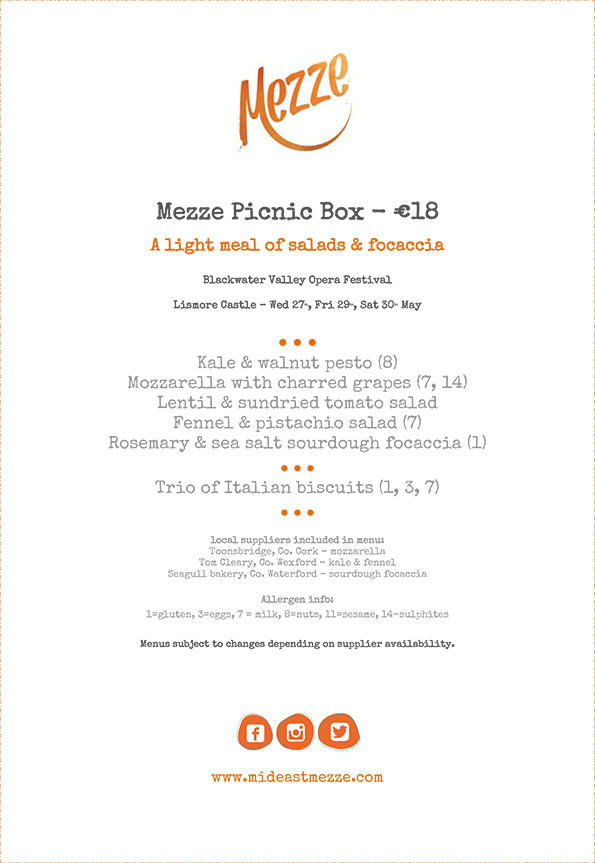 There is no dress code for our opera productions, however, many of our patrons like to take the opportunity to dress up. Due to unpredictable weather, this means that on occasion guests are obliged to pair their dress suit or cocktail dress with wellies and a coat. Comfort is the order of the day, so feel free to dress up or down.

Whatever you choose, please bear in mind that the Festival takes place outdoors at night, and that rain is not an impossibility, even in late May.

CREATIVE TEAM:
Once again, the co-founder of Blackwater Valley Opera Festival Dieter Kaegi is at the helm. For the 2020 festival, he is joined by director Pierre-Emmanuel Rousseau. Acclaimed conductor Darren Hargan will raise his baton again at Lismore Castle following his engagement in Don Pasquale at the 2019 Festival.

The Story & The Characters

Gianni Schicchi:
In this hilarious farce, Gianni Schicchi opens with the Donati family mourning the passing of their patriarch, Buoso. Their tears, however, are not real – that is, not until the Donatis discover Buoso has bequeathed his fortune to a monastery. Frantic, they call upon Gianni Schicchi, a self-made lower-class man, to help them re-write Buoso’s will. In a series of comedic hijinks, secret deals, and one over-the-top scheme, the family succeeds having the will re-written. However, the Donatis are in for another surprise: when the will is read, they discover that Schicchi has left the bulk of the fortune to himself.

Wily Schicchi wins the audience over by arguing that his fraud has not only humbled an arrogant family, but has also brought together two young lovers: his daughter, Lauretta, and young Rinuccio Donati.

Pagliacci:
A dramatic tale of love and betrayal, Pagliacci revolves around a commedia del arte troupe. Married couple Canio and Nedda are the troupe leads along with Tonio and Beppe. Trouble in paradise comes in the form of Nedda’s secret affair with Silvio. Fearing what her jealous husband may do, Nedda attempts to end her relationship with Silvio, but instead, he convinces her to run away with him. Before the lovers can flee, the married Tonio confesses that he, too, is in love with Nedda. Nedda’s rejection humiliates Tonio and, seeking revenge, he tells Canio that she is having an affair just as Canio suspected. During a troupe performance, Canio confronts his wife on stage and stabs her to death. Silvio attempts to save Nedda, but he too meets with Canio’s dagger.

The audience, not realizing the murders were real, applaud wildly. The crowd is finally silenced by Canio’s impassioned cry: “The comedy is ended!”

A key feature of the Blackwater Valley Opera Festival (BVOF) is a full dress rehearsal production of the opera, presented free of charge to school children. We are gratefully assisted by The David Ross Foundation to provide the school children with this wonderful opportunity.

Last year over 450 children from schools in Waterford attended ‘L’Italiana in Algeri’ and the feedback was overwhelmingly positive from both students and accompanying teachers alike (read 2018 school children’s memories here).

For most of the children, this is their first encounter with live opera. The richness of performance and powerful delivery of arias leaves a lasting impression and it is our hope that this will encourage them to further explore opera. This all takes place in the Old Stable Yard of Lismore Castle, courtesy of Lord and Lady Burlington. The Castle alone presents the children with a unique heritage experience, topped off with the joy of opera.
This year we present the Opera Festival double-bill Gianni Schicchi and Pagliacci on Tuesday, 26 May at 20:00 for our schools’ audience.
Educational materials will be circulated to participating schools in advance of the event which will give the children a deeper appreciation of what they will encounter. A partnership with Local Link, kindly facilitated by the Arts Office of Waterford City and County Council, allows us to provide coach transport to bring school groups to this enlightening event.

BVOF’s education programme is not limited to our Schools’ Night Opera. We are proud to include the Double Bill at Dromore Yard and music workshops at local schools in our educational offering. We are always happy to engage with schools and teachers. Should you be interested in reaching out to us with regard to the education programme, please contact fiona@blackwatervalleyoperafestival.com.
If you would like to register your school group’s interest in attending this year’s Schools’ Night Opera, please complete and submit the form below.

The Blackwater Valley Opera Festival, centered in Lismore, Co. Waterford, is held in the breathtakingly beautiful surroundings of Lismore Castle and Historic Houses on the shores of the scenic Blackwater River.

We use cookies to ensure that we give you the best experience on our website. If you continue to use this site we will assume that you are happy with it.OkPrivacy policy