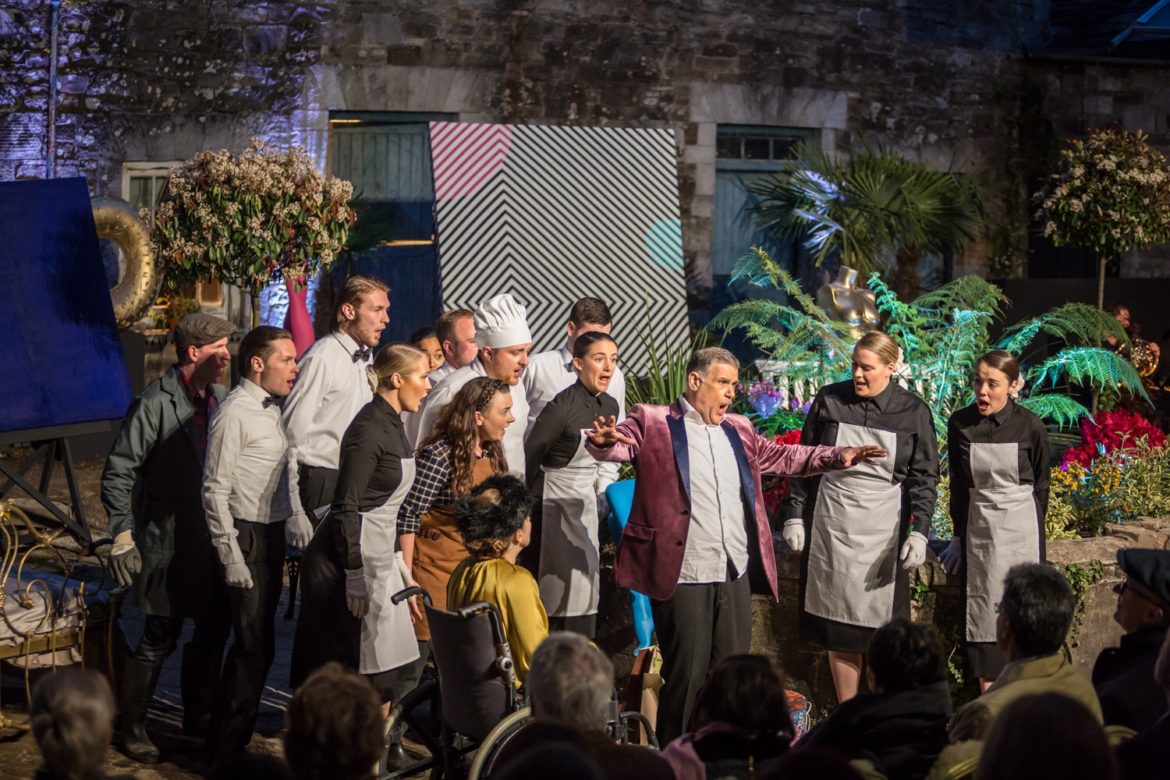 On the Blackwater river in Seat East Ireland stands the imposing castle of Lismore, home to the Blackwater Valley Opera Festival. During the first week of June, opera-goers can be seen strolling through its wonderful gardens, partaking of its marvelous dining options, and picnicking in the marquees dotted between its flowerbeds. The surrounding countryside, with its rolling green hills provide a charming backdrop to this pleasant scene, and although the castle itself is positioned close to the town, the only sense of its existence is the cathedral’s spire which rises above the tree line. It is a tranquil and relaxing environment, and possibly the most beautiful venue of any of the opera festivals which fill the summer months.

Now in its tenth year, the festival (originally named the Lismore Opera Festival), is starting to become an established event. Over the years it has grown significantly, both in quality and in length, and now runs for seven days, boasting an array of musical events, from the main opera itself in the castle grounds, to numerous recitals in a variety of venues, including many of the local country houses which litter the valley. The operas chosen up to now have been well-known comedy operas, by composers such as Mozart and Rossini, and this year’s offering, Donizetti’s “Don Pasquale,” continues in the same vein, although in what was a new development a second opera, William Balfe’s “The Sleeping Queen,” was also given in St. Carthage’s Cathedral.

The World of ‘Don Pasquale’

The actual performance space is a courtyard in front of a number of old buildings, which provides a natural and attractive scene for the opera, with the orchestra situated on the same level, to one side. It was an area which the director, Pierre-Emmanuel Rousseau, and set designer, Slawek Narvid, made full use of, and incorporated it successfully into the staging, with the cast frequently entering and exiting via the buildings, or appearing at the windows, in what was an energetic, lively and fun presentation. There was no attempt to elevate the work to a higher level, or to give it an obscure reading. It was what “Don Pasquale” was supposed to be, a light comedy, which amused, delighted and had the audience laughing out loudly, with Rousseau skillfully coaxing excellent acting performances from the entire cast, who also appeared to be enjoying themselves.

The props blended nicely into the scene, including the caravan which was wheeled on from the side, and from which Norina made a big splash with her lager-than-life entrance. Colorful flowers, mainly rhododendrons adorned the scene. Costumes, also designed Narvid, were colorful, of more or less contemporary design and used successfully to magnify the characters roles.

One minor criticism that could be made, was that Rousseau’s approach was occasionally one-paced in that he never failed to let an opportunity pass by without highlighting the comedy of the situation, which often was of a slapstick nature. Towards the end of the evening, however, such antics started to lose their lustre. Overall, however, it was a highly successful presentation with an excellent pace, and clear narrative, which was enthusiastically received by the audience.

The Italian bass, Michele Govi, was parted in the role of Don Pasquale, and produced a carefully measured performance. He is a natural buffo singer, in which he inflected the voice with just the right emphases and with the precise timing to maximize the comedic effect, which he supported with appropriate facial expressions, exaggerated gestures and ridiculous swagger which quickly turned into frustration and fear. It was a finely crafted portrayal, in which Govi brought out the absurdity and pathetic posturing in Pasquale’s behavior, and hammed it up for all it was worth, to the extent that the audience was able to forgive his mean-spirited nature, and even feel a little sympathy for the old fellow, who was led on a merry dance by the quick-witted Norina and Dr. Malatesta.

Norina, played by the soprano, Aoife Gibney, was not so much impish, playful or flirtatious, but more of a highly sexualized vamp, determined to get her way, and who positively enjoyed Pasquale’s pain, and who, one also felt, was not particularly loyal to Ernesto either, her relationship with Dr. Malatesta being ambiguous to say the least.

Gibney’s vocal technique had much to admire, her attractive coloratura was nicely contoured, and her trilling was precise and securely delivered. Her phrasing was intelligently wrought, and displayed a high degree of agility. Moreover, the tone of her voice suited her hard-edged characterization of Norina.

The baritone, Emmett O’Hanlon, as Dr. Malatesta made a very good impression, producing a strongly defined reading. He has strong voice, with a warm endearing timbre. He articulates in a very clear manner, and showed marvelous ability when engaging in the quick-patter exchanges with Pasquale and Ernesto.

The Argentinian tenor, Manuel Nunez Camelino, playing the role of Ernesto, acted out the part as a young man who had lost all hope, and spent most of the evening drunk or raging. His acting was lively and well-crafted, but although he possessed a voice with a pleasing timbre, his singing was inconsistent and did not convince.

The small role of the notary, Carlino, was played by the soprano, Sandra Oman. Apparently having had a recent accident she was forced to play the part from a wheelchair, which was cleverly incorporated into the comedy. Vocally she gave a good account.

The chorus, comprising students from DIT Conservatory of Music, under the management of the Chorus Mistress, Mairead Hurley, was excellent in every respect. There acting was lively and convincing, their singing energetic, vibrant and engaging.

Small But Full Of Energy

Darren Hargan, conducting The Blackwater Valley Orchestra, which was of fairly limited proportions comprising only 14 members, produced an intimate sound, which was nicely matched to the dimensions of the temporary auditorium. Exploiting the potential of the small orchestra, Hargan produced a clear, refined sound with a textural character more akin to chamber music, which suited the very close and personal interactions of the drama. He maintained an excellent balance between the musical forces, allowing the necessary time and space for the singers to perform.

Overall, this was a fine performance; it was musically engaging, and played up the comedic elements for all they were worth, which kept the audience thoroughly entertained. Even the rain, which started to fall shortly before the start, did little to dampen their enthusiasm. Given that 10 years ago the festival was operating on a much smaller scale, performing with only piano accompaniment, it has come a long way, and is now taking on the air of an established festival. It now has an international cast, which produced some accomplished performances, a quality small-scale orchestra, a young, talented conductor and an established director and set designer, and this year employed surtitles for the first time.

Of course, all this means that expectations are also rising, and so the artistic challenges facing the festival over the coming years will also inevitably increase.

Reproduced with kind permission of operawire.com